Remember the first Finding Bigfoot profiles you generated with Blackfire? We discovered that a sighting page is much slower than the homepage (around 350ms versus 70ms). Checking that PHP never takes more than 75ms to render a Finding Bigfoot web page can be expressed with the following Blackfire assertion:

What about making sure memory usage never grows beyond 5Mb? Here you go:

Like xUnit test frameworks, Blackfire groups related assertions in tests. Tests are written in the YAML format and stored in a .blackfire.yaml file in your project’s root directory or one of its parent:

You can use the blackfire client:bootstrap-tests command to create a .blackfire.yaml skeleton.

You can create a new test by adding an entry in the tests block. Give it a name (“All pages are fast”) and configure it with a path, the HTTP path info that must match for the assertions to be evaluated.

The .blackfire.yaml file must be stored in your project alongside the project code for the same reasons your unit and functional tests are stored with the code: Tests must evolve at the same time as the code. When adding a new feature or changing existing code, you should also add new Blackfire tests or update existing ones. Keeping everything together makes incorporating Blackfire into your development workflow much easier.

After creating the .blackfire.yaml file, generate a new profile for the Finding Bigfoot homepage and notice the new green tick in the browser profile summary:

Do the same with a Sighting page and you should see a red cross. When viewing the associated profile, select the “Assertions” tab to better understand which assertions failed and why:

Whenever a profile is generated for a new page or for a page where a bug was fixed or a new feature added, Blackfire will run all appropriate tests. The red cross or green tick will immediately tell you if any assertions failed.

To writing assertions on the main profile costs, add a valid dimension name to the main. prefix:

Testing the main profile dimensions is a good place to start, but Blackfire gathers much more data, including function calls and their associated costs. You can write tests against these statistics as well.

Assertions cannot be written on nodes directly, but via associated metrics. A metric is a name put on a node or a set of nodes that represents their costs. In assertions, the value of a metric for a given dimension can be used to define the performance expectations of a project.

Generating a profile on a sighting page leads to the following results: 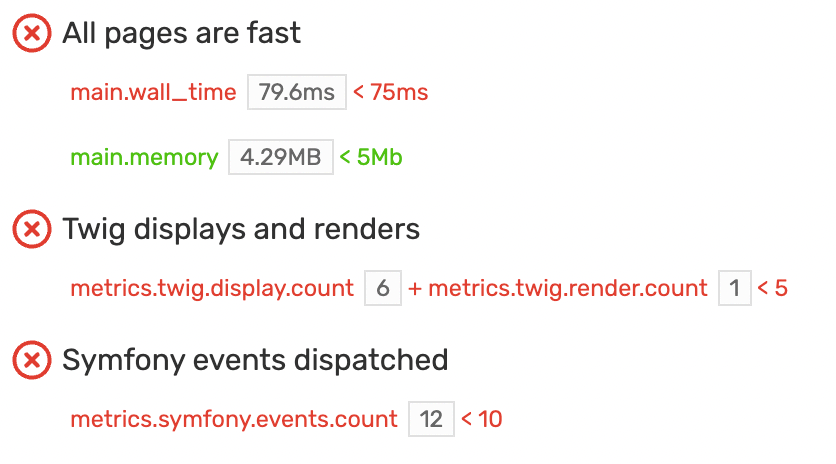 Metrics can have a direct relationship with a specific node like the number of Symfony events dispatched: the metrics.symfony.events metric contains the costs of the calls on the Symfony\Component\EventDispatcher\EventDispatcher::dispatch() method. But sometimes, like for the number of Twig template displays, it can be an aggregation of nodes:

The format of metric definitions is defined in the metrics documentation.

Blackfire tests are a great way to make sure that your application satisfies predefined performance constraints. You can also check the evolution of the performance by writing assertions for profile comparisons.

Assertions on comparisons ensure that an application’s performance does not degrade from one version to the next. And then, when it crosses the threshold defined in your tests, fixing the problems will be more difficult and time-consuming.

Comparison assertions are only evaluated when running builds. Blackfire Builds are sets of Profiles triggered during automated tests. They will be covered in chapter 15.

For instance, you can limit the increase of memory from one version to the next with the following assertions:

Blackfire comes with many built-in metrics, but you can also create your own.

Finding Bigfoot, as all apps, relies on custom classes that may be either resources-intensive or hardly optimizable. One possible test could be to check the number of calls made on those classes. As Blackfire does not come with a built-in metric for that, let’s create one:

Custom metrics are configured and used in the exact same way as built-in ones. The agree_to_terms metric aggregates the costs of all App\EventSubscriber\AgreeToTermsSubscriber::onRequestEvent() method calls. The new test asserts that there is no more than 1 call and that it does not take more than 5ms to execute: 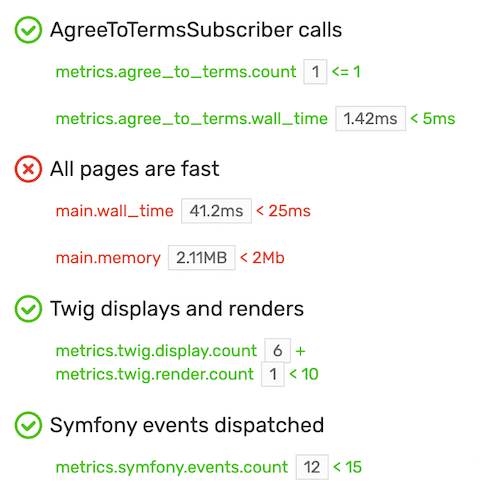 The SQL queries and fetched URLs included in a Blackfire profile come from the graph as well. These values are arguments to specific function calls.

Custom metrics can also get one argument per function call. It could be interesting to group calls per the values passed to visualize their impact on the performance.

Create a new metric whose only goal is to capture the first argument of the App\Repository\CommentRepository::countForUserId method:

If you generate a new profile, the IDs of the User are now part of the graph.

When you configure Blackfire to gather an argument, the related nodes are always displayed, even if their consumed resources are insignificant as in the above example.

And we have just scratched the surface of what’s possible with custom Blackfire metrics!

The format of metric definitions is defined in the https://blackfire.io/docs/testing-cookbooks/metrics documentation.

Testing CLI commands can be done in the .blackfire.yaml file as well by replacing path with command in the test definition.

Let’s write a test to check that the number of calls to restoreFile() to retrieve the cache for methods is exactly the same as the number of classes in the project phpmd is working on:

The first custom metric (parses) stores the number of classes to parse and the second one (cache_driver) stores the number of calls to restoreFile(), but only when the argument contains methods (methods are cached to files with names that include the string methods). The assertion is then a matter of checking that the two numbers are equal:

You probably won’t write this sort of test very often, but it demonstrates the simplicity and the expressiveness of Blackfire tests.

Blackfire tests use a rich expression language that allows developers to express any kind of assertion. Tests can be used for:

Finding the right assertions for a project can be tough at first. In the next chapter we will discuss some best practices that will help you get started on the right foot.