In the previous chapters, we analyzed some call graphs, but we never fully explained what they represent and how to read them efficiently. Let’s dive into the wonderful world of call graphs.

Blackfire records the functions called during the execution of a program and their relationships as a call graph. A call graph knows nothing about when a function was called, but it reports the sequence of calls between functions.

In a call graph, nodes represent functions and edges the calls between them: 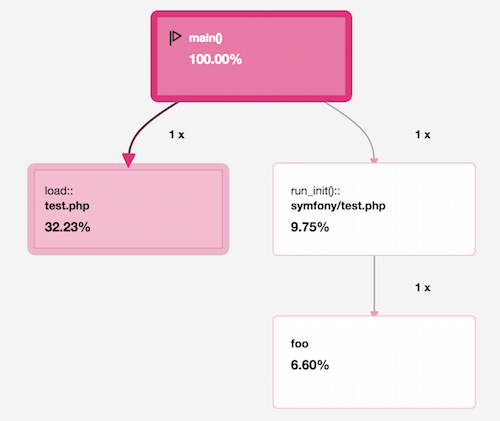 To keep data small, Blackfire does not keep the full-context of calls (i.e. the arguments). Therefore, a node aggregates all calls to a function, regardless of the argument values. This is why each node has a count (the number of times the function was called) and why nodes can have more than one parent.

For some specific functions, Blackfire does keep one argument at most to gather useful generic information like SQL queries, HTTP requests, or specific information like the event name for the Symfony event dispatcher. In that case, specific nodes are created for each unique argument. 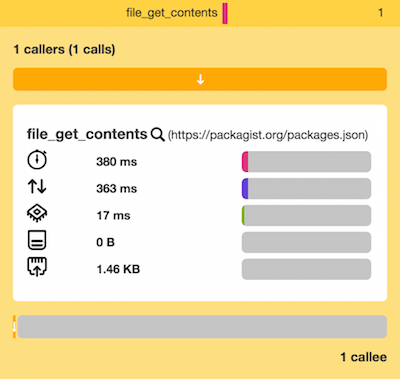 Having only one node for each function call greatly simplifies the interpretation. But keep in mind that functions for which we gather an argument consist of several nodes (using the search engine helps figure that out), like for the file_get_contents() example above.

When generating a call graph, Blackfire does not cycle through the same node multiple times for recursive calls. Instead, it creates additional nodes for each recursive call and suffixes those nodes with @n. This type of graph, called an acyclic graph, is much easier to read and makes calculating exclusive costs much simpler. 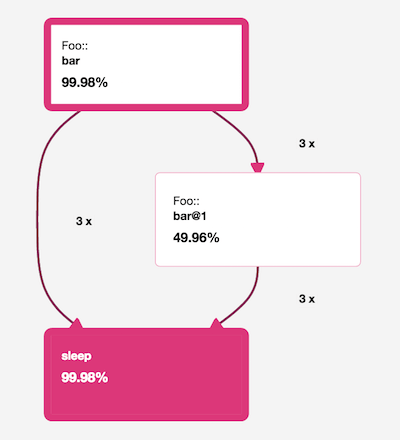 A Blackfire call graph is selective in what it displays. When you profile an application with many, many function calls, you will not see so many nodes on the graph. This is because Blackfire cleans up the data. Small nodes (function calls that consume negligible resources) are hidden by default. However, you will see these minor nodes when you focus the graph on a caller or a callee, as all parents and children of the focused node are always displayed.

Blackfire also removes nodes that are too small to be optimized. They are represented in the functions table as a grey bar: 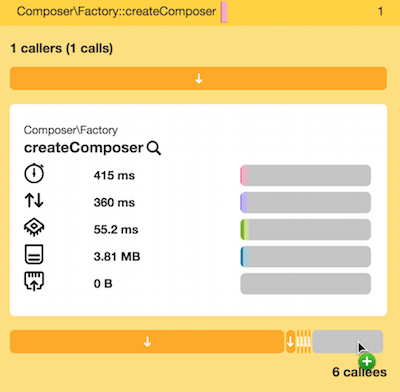 Blackfire also adds some special nodes that are not function calls per se like the main node, garbage collection, and session serialization. These nodes augment the call graph with useful information that helps us understand PHP’s behavior while executing your code: 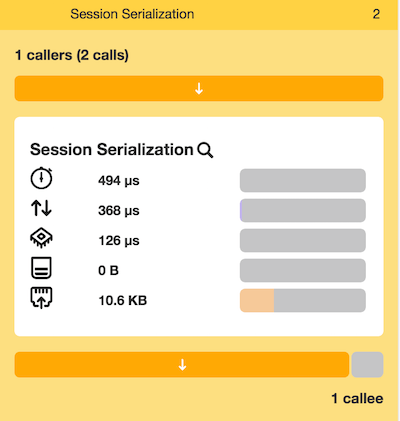 The call graph data sent to Blackfire’s server is thoroughly sanitized and never contains sensitive data. Function names do not convey any meaningfulness without their associated code, and arguments are anonymized by the agent before they are sent to our servers (SQL arguments are removed; usernames, passwords, and query arguments are removed from HTTP requests, etc).

If you want to inspect the traffic between your profiled server and Blackfire’s servers, you can check the transmitted data by using our free and transparent proxy. Please read the instructions in the script itself.

Blackfire’s user interface has many additional features that make navigating your call graph a breeze:

Looking at a call graph can be overwhelming. Where do you start? What are you looking for first? When do you stop?

The goal of any profiling session is to find the function calls or the group of function calls that consume the most resources and then be able to analyze their implementation and find ways to optimize them.

Knowing when to stop optimizing is as important as knowing where to start.

The goal when profiling an application is never to optimize everything. Instead, Blackfire helps you find areas of your application to optimize that will give you the best improvements. That’s exactly what we have done in the previous chapters. We were able to significantly optimize two Open-Source projects by applying some changes that were easy to apply once we knew where to look.

All these methodologies help you find the function calls you need to optimize first. Whatever the methodology, when you find such a call, always focus on the corresponding node in the Blackfire interface so that you can see more context in the call graph. You can focus on a node from the call graph or from the function list by clicking on the magnifying glass:

The call graph is then centered around the selected function call and all callers and callees are displayed, even the smaller ones. This view gives you more context to understand the real behavior of the code.

There are two main approaches to analyzing a call graph: the function calls first approach, and the call graph top/down approach. Both methods are complementary.

This method involves looking first at the function table on the left side of the Blackfire interface.

First, sort the table by exclusive time (default sort), and focus on functions in the top 25 only, in this order of importance:

Then, sort the table by number of calls and look for the same functions as above adding one more type:

Never try to optimize a function with a high call count if its overall cost is negligible. This is never worth it.

This technique works great when there are a few calls that stand out; These cases are usually caused by developer mistakes (n + 1 queries, intensive function calls that could have been cached, large number of calls of a single function, …).

This method involves following the critical path on the call graph to better understand how the code is executed by PHP.

On the call graph, the critical path is composed of all the nodes with a red border. Start at the main node, then follow its children by navigating the call graph with the mouse.

Whenever you encounter several branches, choose the branch that mostly involves function calls coming from your codebase.

Then, stop when a node looks like it could be optimized (i.e. if you see a significant drop in exclusive time).

This technique works well when it is not immediately obvious where to focus first. Also, once you find a node to look at more closely, you already have a better understanding of the context and what happened before.

Instead of following the call graph, you can perform the same technique directly from the function calls table by sorting it by inclusive time.

Correctly configuring PHP caches is critical for optimal performance: you should not get to a full cache. Anytime you profile your code, when viewing the profile data, check the cache information in the sidebar.

The realpath() function returns the absolute path for any given relative file path. This conversion takes a non-negligible time because it performs some filesystem calls. That’s why PHP caches the results of realpath() calls and their associated stat() calls. The realpath_cache_size ini setting defines the size of this cache.

The realpath cache is only used for file paths that exist and is used for most of PHP filesystem calls. Complex applications involve a lot of file operations, so this cache size must be increased accordingly.

Interned strings are a nice memory optimization that was added in PHP 5.4.

PHP stores immutable strings (a char *) into a special buffer to be able to reuse its pointer for all occurrences of the same string. This setting can be adjusted using the opcache.interned_strings_buffer.

One last bit of advice. Optimization is often a trade-off of time versus memory and performance versus code complexity. Sometimes, it is better to keep a slower implementation to preserve a simpler and more readable codebase. Blackfire is just a tool, don’t apply a methodology blindly.

Profiling should not always be a lonely activity. Teamwork often helps to make problems search and fixes writing go faster. Blackfire helps achieve better collaboration through environments, which is the topic for the next chapter.